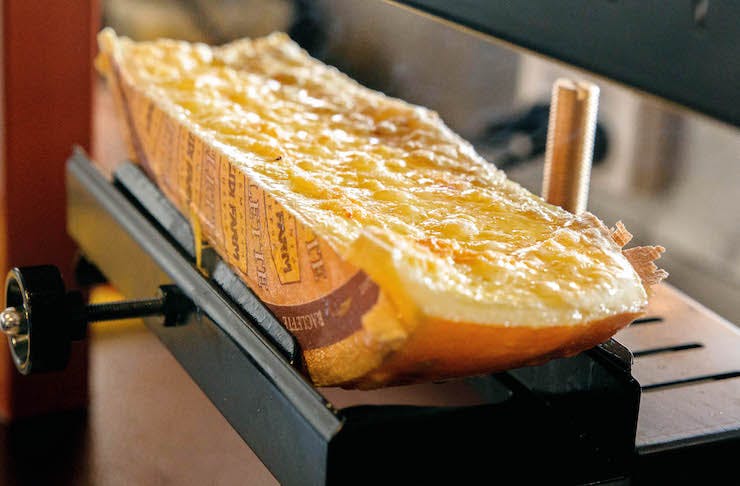 1. a connoisseur of cheese : a cheese fancier.

1. a dish, of Swiss origin, similar to a fondue, consisting of melted cheese traditionally served on boiled potatoes and accompanied with pickles. Calling all the turophiles of Perth for the opportunity to taste test raclette: melted cheese scraped onto other food!

Yes, you have the right to be drooling right now! Pimlott & Strand - Dianella's favourite restaurant with something for everyone - is pleased to be hosting Say Cheese once again on Saturday 17 August, showcasing the wonderful delights of raclette.

For anyone fortunate to have travelled through the Swiss region of the world will no doubt recall with fondness, the taste and the smells of raclette at markets, restaurants, cafe's and apres ski bars.

For everyone else, now is your chance to come down and meet us for a Free taste test and to purchase raclette to take home to impress your family and friends.

Here’s some history and a few interesting facts about raclette to whet your appetite and get you yodelling for joy at this Swiss melted cheese delight.

The History of Raclette

Raclette, the distinctive cheese dish with origins in the Swiss Alps, has a history that goes back many hundreds of years. Once the fare of farmers and shepherds for a midday or evening meal, raclette is often still served as it was centuries ago - rich, melted cheese is combined with potatoes and other vegetables for a warming and hearty dish. Though different variations of the dish have emerged throughout the years - and cooking methods have been updated with better technologies - the distinctive flavour of raclette has remained remarkably and deliciously unchanged through time.

Raclette is both the name of a popular Swiss cow's milk cheese as well the name of a warm dish created by melting the cheese and serving it with a variety of foods. Semi-soft and salted, raclette was first made in the canton of Valais - home of the Matterhorn - in the southwestern area of Switzerland.

The dish featuring raclette cheese dates back more than 700 years, when it was called Bratchäs, Swiss-German for "roasted cheese." Raclette was mentioned in writings as early as 1291. The semi-hard cheese was easy to transport, and it was eaten by shepherds and farmers, who would place a block of cheese by a hearth or a campfire. There, it would become soft, and the melted cheese would be served with potatoes, onions and pickles.

The distinctive flavour and texture of raclette cheese was important in the development and history of the dish. Made from unpasteurized cows' milk, typical raclette is pale yellow, with small holes throughout and a brownish orange rind. When heated, it has a creamy consistency, and its balanced fat content and moisture allow it to melt evenly without separating or becoming oily.

The name "Raclette" is derived from the French word racler, which means "to scrape." Though it is similar to fondue - in which pieces of bread and other foods are dipped into a melted cheese mixture - Raclette is distinctive because the melted cheese is scraped from a block of cheese, then placed over or next to vegetables and bread on a plate. A special Raclette knife or wooden spatula may be used for this purpose.

Though traditionally the dish was cooked with an open flame, raclette melting machines and grills were manufactured and gained popularity during the 1970s, when they became widely available. Once a vegetarian dish served simply with boiled and pickled vegetables and bread, raclette now may feature many kinds of meat, fish, and poultry as well. Both delicious and hearty, the dish is now served throughout the world.

If cooking at home, you can easily melt your raclette cheese in a regular nonstick frying pan. Heat it until the cheese is bubbly and gooey and pour the melted cheese over your plate of goodies and enjoy. It might take a bit more time to serve everyone, but the results will be just as delicious.

You don't need to use raclette cheese

A true raclette cheese is protected by AOP (Appellation d'Origine Protégée), much like Champagne or Roquefort. An AOP raclette is made with the raw milk of cows that have grazed in the mountains of Switzerland. That said, today, raclette cheese is made all over the world, and it is available infused with a variety of flavours, from mustard seeds to local sweet white wine to black pepper or even truffle.

But you don't need to use raclette cheese at all to enjoy this dish. Similar semi-soft alpine cheeses like French Morbier or even Italian Fontina make a delicious substitute.

Raclette style cheese is also manufactured in Australia (see below) and has become more widely available. The Australian version maintains the unique flavour of traditional Raclette cheese which intensify when heated and melts to a creamy consistency.

This Australian benchmark Raclette was created by Swiss-born cheese maker Frank Marchand at Heidi Farm, Northern Tasmania. The original vision to produce a handcrafted cheese still stands and traditional farmhouse techniques continue to be used to make this a benchmark cheese.

Its production is now overseen by another Swiss-born cheese maker Ueli Berger at Burnie in Northern Tasmania. Elastic and supple, this Australian cheese is highly regarded. This cheese offers a hint of sweetness but has an overriding taste of more savoury and yeast notes. It has a dry, leathery rind and the straw coloured interior is spattered with small holes that give it a slightly open texture.

Come down between 10am – 1:30pm and taste this melted goodness.

Heidi Raclette cheese will be available for purchase to take home to impress your family and friends. Or for those hooked on the deliciousness.